I remember, as a child, eating dark, sweet,and fragrant cake/pudding so sticky it stuck to my teeth. It was made of rice, the only kind of cake I ever ate until my mother learned to bake. She didn’t make those rice cakes. Generous aunts usually brought them. Or, we bought them from street vendors, and at my grandma’s little town, from hawkers, chanting their wares as they passed every house on her street.

My first memory of this dark mysterious treat began past midnight on Christmas day, standing in front of a 400-year old church, remnant of Spanish domination more than a century ago. What, you might ask, was a three-year-old doing out at midnight?

Those long-ago days, in an obscure town of the Catholic country of my early years, midnight mass was the first essential ritual of Christmas for old and young. It lasted nine midnights. For me, the ritual ended with a treat after sitting half asleep, leaning on my grandmother, indifferent to words only a few probably fully understood. The mass, I learned later, was in Latin.

Outside the church, a line of vendors hawked midnight snacks. I pulled my grandmother’s hand, and stopped at the vendor laying out hot-dog-sized rolls of sticky purplish black rice. Imagining the taste and feel of those dark, mysterious things on my tongue. 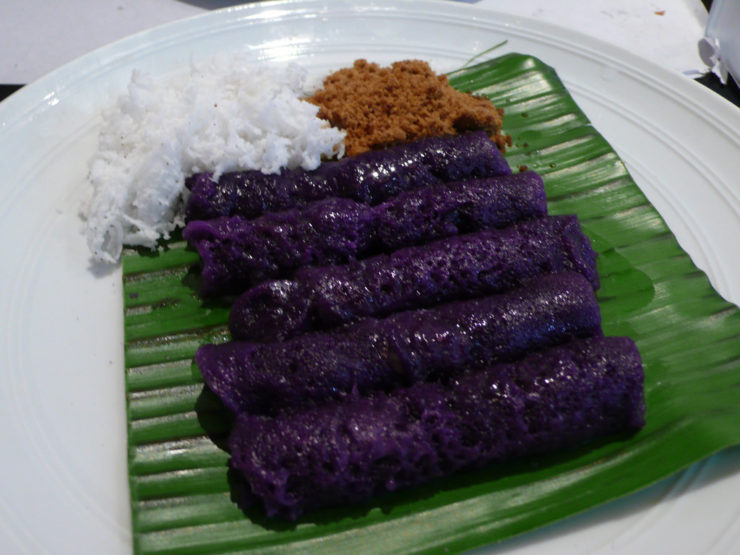 Awaiting a nod from Grandma, I cupped my palms, thrust them toward the lady vendor before she could coax those black rolls out of bamboo tubes steaming over a glowing earthen brazier crimson from burning coals.  She placed them on a square of banana leaf. Sprinkled them with freshly-grated coconut and brown sugar

Nothing, but nothing, could ever duplicate the anticipation, nor the sensation of sinking my teeth, into one of those still hot rolls of black rice. The scent of  jasmine blending with the cool creamy nuttiness of fresh coconut. The heat of the rolls releasing the fragrance of the banana leaf, infusing every bite with it. 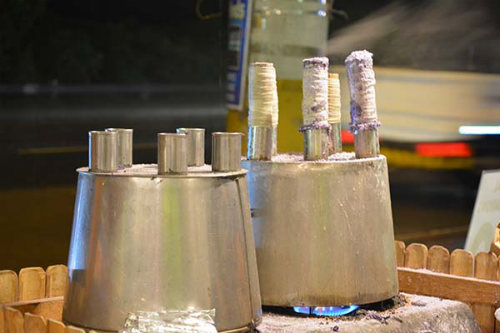 Deep in those dark rolls of rice were secrets I still had to discover. Secrets revealed to me only after I left that town of magical memories to navigate a much wider world. Memories reawakened decades later by a bag of glutinous black rice glaring  at me from a top shelf at the Asian market in nearby Richmond. It dared me to pick it up.

I kept the bag of black rice in my pantry, mostly out of nostalgia. Rarely using it. Cooking it for a simple bowl of steamed rice took too much time. But then, days later, a server at an Indonesian restaurant enticed us with  a bowl of Indonesian black rice pudding.

It was a sweet surprise. Unlike the rolls of black rice, this pudding was softer, served in a large parfait glass through which you could see the thick layer of purplish black pudding and the thin creamy layer of coconut milk. Out of the glass, wafted an herby jasmine fragrance with a hint of nutty coconut.

Memories of those native delicacies have stayed with me, become part of me. Maybe, because of them, I’ve explored food and eating in places I’ve traveled. Relished writing food and eating scenes in my fiction (Sugar and Spice and All Those Lies, in particular)—scenes hinting at little truths about characters, places, and events. Discovered the mood changing, even transformative, effect of food (watch Babette’s Feast, based on a short story by Isak Dinesen).
And here’s one of the most joyful Christmas songs that will make you want to dance:

Flight, Saint-Exupéry And Friends:The Prince of the Skies by Antonio Iturbe